Founder of ISKCON. His Divine
Grace A.C.Bhaktivedanta
Swami Prabhupada
Such a liberated person is not attracted to material sense pleasure but is always in trance, enjoying the pleasure within. In this way the self-realized person enjoys unlimited happiness, for he concentrates on the Supreme. (Bhagavad-gita 5.21)
Projects  |  Holy Dhamas  |  Krishna  |  Bhagavata  |  Sampradaya  |  Calendar  |  Contact 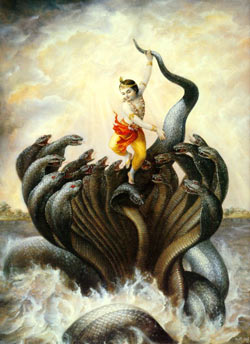 Diary of a spiritual journey 22

Janmastami is approaching. Preparation is in full swing. My lectures are also warming up to Krsna’s pastimes.

One who knows the transcendental nature of My appearance and activities does not, upon leaving the body, take his birth again in this material world, but attains My eternal abode, O Arjuna. Bg 4.9

Again we will concentrate on Bhumi, the planet earth, who in the form of a cow approached Lord Brahma in great distress due to being overburdened by the sinful behavior of demoniac of many demoniac kings. Compassionately Lord Brahma accompanied by all the demigods will proceed to the shore of the ocean of milk where lord Visnu lies on a bed of Sesa Naga. In response to prayer the Lord will transmit a message which is only heard by Brahma, that soon He will appear in this world and that in preparation all the demigods should take their birth in the Yadu dynasty.

Later after Krsna has appeared and has performed many childhood pastimes killing many demons. Kamsa lives in fear of Krsna due to the omen that he will be killed by the 8th son of Devaki. Finally Krsna goes to Mathura to the wrestling match where also Kamsa meet his end. On the way Krsna meets Kubja, a hunchbacked young woman with a beatiful face, who is attracted towards Krsna in a lusty way. Krsna pulls the body of Trivakra, the three curved one, and makes her straight and beautiful. It is stated that Kubja is actually the earth, an expansion of Satyabhama the personification of the Bhu Sakti of the Lord. Thus within this pastime Krsna is actually restoring the earth to it’s orginal glory.

In his book Sri Caitanya Siksamrta Srila Bhaktivinode Thakura has listed all the demons that have been killed by Krsna and Balarama and he explains how each of these demons embody various demoniac anarthas that may be found in the hearts of the conditioned soul. A devotee should make a serious effort to free himself from these anarthas, so that he becomes eligible to enter in to the eternal pastimes of Krsna and become a resident of the spiritual world.

Putana represents the fake guru who teaches bhukti and mukti, material enjoyment and liberation. Devotees attached to bhukti and mukti are like Putana. Being merciful to the pure devotees, Krsna as a baby, killed Putana to protect the devotees’ newly appearing affection for him.

The cart represents the load produced by old and recently acquired bad habits, by laxity and by pride. The mood created by thinking of baby Krsna breaks the cart, or  removes this evil.

The whirlwind demon represents pride in being learned, and the consequent use of faulty arguments and dry logic, the quest for liberation,  and association with such people.  This includes all types atheists believing in material causality.  Being merciful on seeing the affection for the devotee to Him baby Krsna kills that whirlwind and removes the obstacles to worship.

Being controlled by greed and the sinful activities caused by it  are represented by Vatsasura.  By Krsna’s mercy this fault is vanquished.

False dealing due to deceit and cheating are represented by Bakasura. Without  eliminating this, pure bhakti does not appear.

The sinful  mentality to do violence to others is represented by Aghasura. This tendency must be removed.  It is one of the offenses.

Skepticism due to practicing jnana and karma  and disregard for the sweetness of Krsna from attachment to the Lord’s majestic aspect are presented by Brahma when he was put into illusion by Krsna.

Complete ignorance of spiritual truth, originating from material intelligence, lack of spiritual intuition and foolishness, which is contrary to spiritual knowledge, is represented by Dhenuka.

Pride, deceit, harming others, cruelty, represented by Kaliya must be given up by the devotee.

Any type of conflict such as argument, disagreement with other sampradayas, malice to devatas, fighting  are represented by the forest fire.

Pralambasura represents lust for women, greed, desire for worship and position.  These must also be given up.

The forest fire which Krsna swallowed represents the obstacles that atheists create against dharma and preachers of dharma.

The brahmanas performing yajna represent  indifference to Krsna caused by identity with varnasrama or  absorption in karma khanda.

Varuna symbolizes intoxicants.  Some  people mistakenly think that liquor will increase spiritual bliss.  Such thinking must be given up.

The snake which attempted to swallow Nanda  Maharaja represents Mayavada and similar philosophies which try to swallow up the real nature of bhakti. Mayavada association must be avoided.

Aristasura the bull demon symbolizes disregard for bhakti and attraction for cheating religion.

The illusion of being a great devotee or acarya, is represented by Kesi. Lording it over others and material pride must be given up.

In the Eighth Chapter of Sri Krsna Samhita from the thirteenth verse to the end of the chapter, the eighteen anarthas  which are obstacles to Vraja bhajana have been mentioned.   Adding to this the pride of wealth represented by the Yamala arjuna trees and the pride of performance of karma represented by the brahmanas, it becomes twenty obstacles. These twenty are unfavorable for Vraja bhajana. The serious chanter should first address the Lord and pray to him for the power to give up these unfavorable items. By doing this the heart becomes purified. If the devotee prays humbly to Krsna to remove all the  obstacles in the heart  which are represented by the demons He killed, He will  certainly do so.   All the obstacles represented by the demons whom Balarama killed can be removed by the efforts of the devotee himself. ”  Sri Caitanya Siksamrta ch.6

Besides taking the pastimes of Krsna in this introspective way, where we try to overcome our own anarthas, we can also just look at the pastimes directly and learn many things. For example think of Kaliya , the powerful, poisonous manyhooded serpent king. Think of how the residents reached the maximum of emotional intensity that they could bear when they saw Krsna in the coils of that serpent for what appeared to be an endless time, how shocked and amazed were they, when Krsna suddenly freed Himself and started to dance on the hoods of Kaliya. Nobody could believe it, one moment a situation of total disaster, which took everyone to the utmost anxiety and next moment He is dancing as Vrndavana natabara, the most elegant dancer of Vrndavana on the hoods of the serpent. This is our playful Supreme Lord, who play with the hearts of His devotees.