Founder of ISKCON. His Divine
Grace A.C.Bhaktivedanta
Swami Prabhupada
The manifestations of the mode of goodness can be experienced when all the gates of the body are illuminated by knowledge. (Bhagavad-gita 14.11)
Projects  |  Holy Dhamas  |  Krishna  |  Bhagavata  |  Sampradaya  |  Calendar  |  Contact 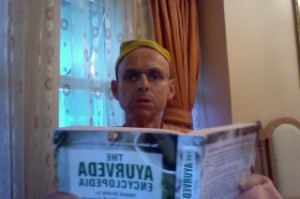 There’s not much going on externally. It’s a health retreat. Confined by bodily limitations. So there are no travels, no programs but rest, some exercise, diet and lots of ayurvedic medicine- better than steroids though.

But Krsna is always there. Prabhupada was describing how the devotees had become transformed into jubilant, dancing peacocks. What a nice statement! The spiritual world is on our mind…

Today, no walk outside. There was a huge thunderstorm at 11am and since then it has been raining the whole day. It doesn’t matter; I’ll chant indoors. 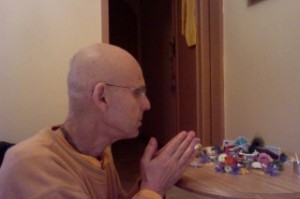 I am not productive at the moment but I am hearing various tapes and chanting Hare Krsna. I am worshipping Govinda, the primeval Lord, who kindly lives with me.

Please maintain me as Your servant.

A meeting with Dr. Robert Powell 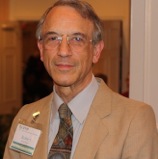 Last week Dr. Robert Charles Powell came and visited Durban.  He has studied the care program of the Bhaktivedanta Hospital in Mumbai and came to see the hospice in Durban. I found in Dr. Powell, a pleasant gentleman of very sharp intelligence. We had an enlivening discussion. Dr. Powell is interested in starting an educational program to train Hindu Chaplains.  Chaplains are providing pastoral care; counseling services in hospitals, hospices, nursing homes, assisted living, clinics, industries, schools, prisons and so on.  At this point there are thousands of chaplains in the world from a Christian or Jewish background and maybe five from a Hindu background. Devotees with a bachelor degree would be eligible to enter in to the chaplaincy program. It would offer and opportunity for devotees to make a professional career and maintain their devotional identity. I am very interested in this project and think some devotees with the appropriate nature will find a very good engagement in this. The Radhadesh College students may also take note of the program. Ravindra Svarupa is in regular contact with Dr. Powell.  I would like to find some devotees in South Africa from an African background, who are interested in the program. I think that would be a real asset to our movement in South Africa. 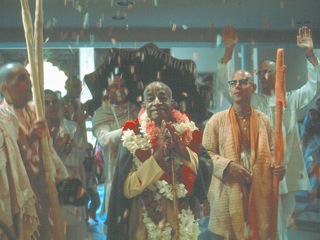 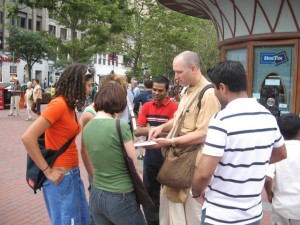 The devotees are out on the Book distribution marathon.

Have a look on you tube: Book Distribution- HG Vaisesika Prabhu- 7th Gosvami 101

There are several other longer videos as well. One is showing him in action in Boston on July 4th. Yesterday I watched it with great pleasure.

I hope that more devotees will go out just for a day or on the weekends. It all makes a difference for the people out there and for us in coming closer to Krsna.

If you can’t distribute books, then buy books and give them away or leave one in the doctors waiting room…!