Founder of ISKCON. His Divine
Grace A.C.Bhaktivedanta
Swami Prabhupada
O best of the Kuru warriors, no one before you has ever seen this universal form of Mine, for neither by studying the Vedas, nor by performing sacrifices, nor by charity, nor by pious activities, nor by severe penances can I be seen in this form in the material world. (Bhagavad-gita 11.48)
Projects  |  Holy Dhamas  |  Krishna  |  Bhagavata  |  Sampradaya  |  Calendar  |  Contact 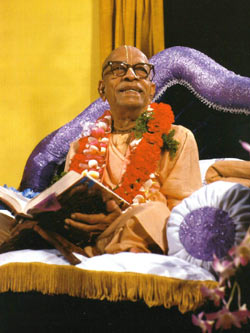 The Hare Krishna movement strictly adheres to the sampradaya system. Srila Prabhupada, the movement’s founder, was a spiritual master of the Brahma-Madhva-Gaudiya sampradaya, which begins with Lord Krishna and includes His most recent descent, Chaitanya Mahaprabhu.

The lineage is known as the Brahma sampradaya because at the beginning of creation Lord Krishna Himself enlightened Brahma, the original inquisitive soul, the first created being.

The line later becomes known as the Brahma-Madhva sampradaya because of the prominent teacher Madhva (A.D. 1238-1319).

Still later, the line becomes known as the Brahma-Madhva-Gaudiya sampradaya after the line is joined by Sri Chaitanya (1486-1534), who appeared in the region of Gauda (Bengal) and imbued the tradition with new vigor.

The members of the sampradaya up to Srila Prabhupada, the founder and spiritual preceptor of the International Society for Krishna Consciousness, are listed below.