Founder of ISKCON. His Divine
Grace A.C.Bhaktivedanta
Swami Prabhupada
The Vedas deal mainly with the subject of the three modes of material nature. O Arjuna, become transcendental to these three modes. Be free from all dualities and from all anxieties for gain and safety, and be established in the self. (Bhagavad-gita 2.45)
Projects  |  Holy Dhamas  |  Krishna  |  Bhagavata  |  Sampradaya  |  Calendar  |  Contact

Bhagavad-gita As It Is 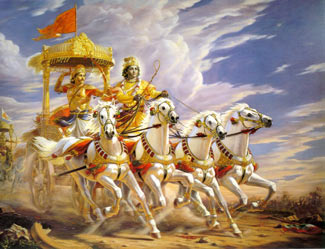 Bhagavad-Gita As It Is is the largest selling edition of the Gita in the Western world. It contains knowledge of five basic truths: Krishna (or God), the individual soul, the material world, action in this world, and time. The Gita lucidly explains the nature of consciousness, the self, and the universe. The essence of India’s spiritual wisdom, it answers questions posed by philosophers for centuries.

In translating the Gita, A. C. Bhaktivedanta Swami Prabhupada has remained loyal to the intended meaning of Krishna’s words, unlocking the ancient secrets of the Gita and placing them before us as an exciting opportunity for self improvement and spiritual fulfillment.

The Bhagavad-gita is the main source book on Bhakti yoga and a concise summary of India’s Vedic wisdom. It explains how to act for God in our life and develop our love for Him, the three modes of material nature, the divine and demoniac natures, and much more.

Bhagavad-gita As It Is is the largest-selling, most widely used edition of the Gita in the world. It includes the original Sanskrit text, the English equivalent for each Sanskrit word, prose translations, plus elaborate commentary on each verse. Bhagavad-gita online

Srimad-Bhagavatam, a Major Contribution to the Understanding of God 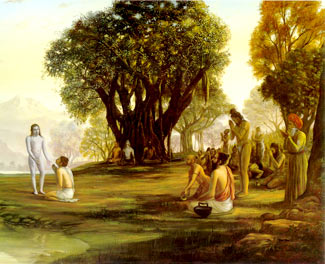 The Vedas deal with many subjects. They are the books of a highly developed civilization and cover all departments of knowledge. Among them, Srimad-Bhagavatam deals exclusively with subjects about God. Srimad means “beautiful” or “opulent,” and Bhagavatam means “related to God.” Hence, Srimad-Bhagavatam can be translated as “The Beautiful Story of God.”

Srimad-Bhagavatam describes God, our relationship with Him, and the process for realizing that relationship. Its 18,000 verses give detailed accounts of God’s names, forms, nature, personality, devotees, activities, residences, and much more.

In one of the opening chapters, the narrator explains that the sage Vyasadeva, who wrote portions of the Vedic literature and compiled the rest, felt dissatisfied despite his accomplishments. Under the order of his guru, he then embarked on writing Srimad-Bhagavatam, considered the ripe fruit of the tree of the Vedas.

Srimad-Bhagavatam, an epic philosophical and literary classic, holds a prominent position in India’s voluminous written wisdom. The Bhagavatam is the postgraduate, post-Vedic text of spiritual understanding. It has served as the inspiration for countless works of literature, song, drama, painting, and sculpture.

Known as “the ripe fruit of the tree of Vedic literature,” Srimad-Bhagavatam is the most complete and authoritative exposition of Vedic knowledge. Covering everything from the nature of the self to the origin of the universe, it touches upon all fields of knowledge.

Vyasadeva compiled Srimad-Bhagavatam, after Krishna left this world 5,000 years ago. The 18,000-verse treatise centers on the science of God and devotion to Him, and includes biographies of great devotees who followed the path of Bhakti and attained Krishna.

The first verse of Srimad-Bhagavatam makes clear that the book is intended for people serious about spiritual progress; it will not deal with sectarian religious ideas, philosophical conjecture, or worldly concerns. The second text promises that anyone who reads the book systematically will achieve the spiritual success meant for all human beings. Srimad-Bhagavatam online