Founder of ISKCON. His Divine
Grace A.C.Bhaktivedanta
Swami Prabhupada
When they have thus enjoyed vast heavenly sense pleasure and the results of their pious activities are exhausted, they return to this mortal planet again. Thus those who seek sense enjoyment by adhering to the principles of the three Vedas achieve only repeated birth and death. (Bhagavad-gita 9.21)
Projects  |  Holy Dhamas  |  Krishna  |  Bhagavata  |  Sampradaya  |  Calendar  |  Contact 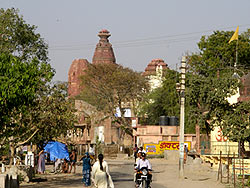 Mathura lies ninety-five miles south of Delhi. It is most famous as the place of Krishna’s birth, which tradition dates to some five thousand years ago. Its main temple is the Keshava Deo Mandir, where Radha and Krishna are worshiped. The entire area, encompassing many holy sites and twelve sacred forests, is called Vraj. Most important is Vrindavan, the village where Krishna lived. It is now a bustling town with some five thousand temples, mostly dedicated to Krishna. Many elderly Vaishnavas retire to this sacred town in the hope of returning at death to the spiritual Vrindavan, where they can engage in eternal lila (pastimes) with their Lord.

Mayapur is located on the banks of the Ganges River near Navadvip, West Bengal, 130 km north of Kolkata (Calcutta). It is considered a holy place by a number of other traditions within Hinduism, but is of special significance to followers of Gaudiya Vaishnavism as the place where Chaitanya Mahaprabhu, regarded as a special incarnation of Krishna and Radha, was born in 1486. It is visited by over a million pilgrims annually.

Since the 1970s, Mayapur has also been the site of the world headquarters of the International Society for Krishna Consciousness (ISKCON) as well as a number of other Vaishnava organizations, such as the Gaudiya Math. 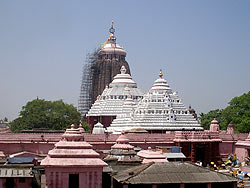 Puri is considered one of the holiest places in India by many Hindus. But it is particularly revered by Vaishnavas as the home of Krishna in His form of Jagannatha, Lord of the Universe, as well as being the site of many of the pastimes of Sri Chaitanya Mahaprabhu. The Jagannatha temple itself is nine hundred years old, and the deities are served by six thousand priests. It is strictly forbidden for non-Hindus to enter.

Puri may be most famous for its annual Ratha-yatra (chariot festival), in which the deities of Jagannath, his brother Baladeva and sister Subhadra are paraded through the city by thousands of pilgrims. Replica Ratha-yatras are celebrated throughout the world.